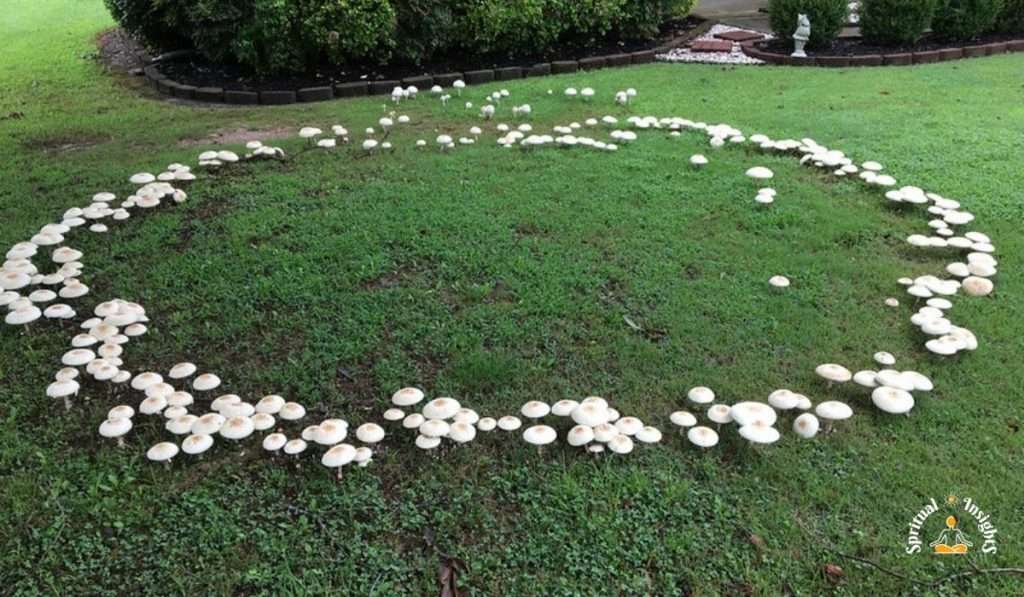 When I was a child, I used to love dancing around a fairy ring and pretending I was one of them. I would sing and dance and pretend a dozen fairies were right there with me.

It wasn’t that I believed in those fairies, but I just wanted to make-believe for a short while. This was well before I learned of the various folklore that says fairy rings are dangerous.

As I grew up, I started researching more about fairy rings after I accidentally came across one. That was when I discovered all the folklore behind fairy rings and the spiritual meaning of fairy rings.

For those unfamiliar with fairy rings, they are ring-shaped patterns that occur naturally in grassy areas. The rings are formed by fungi, and the shape forms when they grow outwards in a circular pattern.

It is said that if you find fairy rings inside your house, you have received a gift or a visit from fairies. Whether the visit is a good one or will cause you harm depends on the folklore you believe.

However, most of these folklores seem to agree that there is a spiritual meaning of fairy rings, and we are going to look into that today. 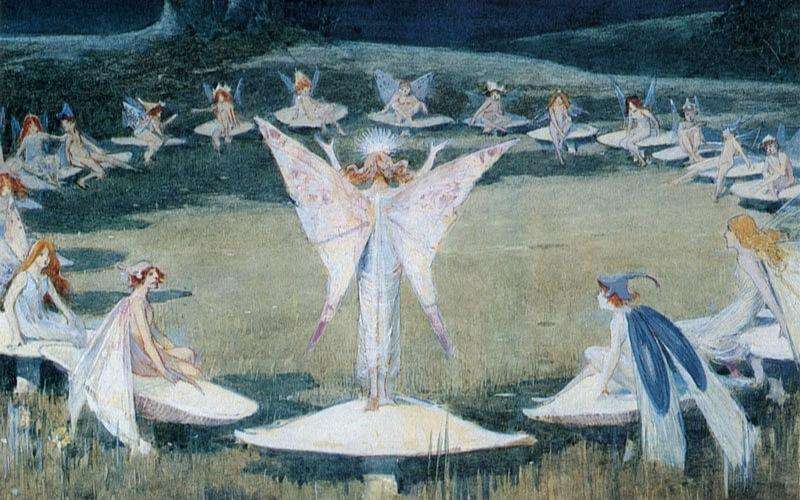 If you have seen fairy rings around your house or in a field and thought there must be a spiritual connection or meaning, you are absolutely right.

Below is the spiritual meaning of fairy rings:

This is one of the spiritual meanings of fairy rings that aren’t connected to their darkness. In Welsh tradition, fairy rings are said to be good luck. You are said to bring good fortune into your life if you grow crops around the rings or let your livestock feed nearby.

These same traditions warn against entering the rings; thankfully, little me was unaware of the consequences of stepping inside fairy rings.

In some traditions, it is believed that fairy wings, also called Hexenringe in German, were formed when witches would dance to mark Walpurgis Night, a celebration welcoming the start of spring.

There is no clear meaning of what good fortune will come to you if you spot a fairy ring, but you are advised to be on the lookout. The good luck can be connected to your health, wealth, or personal relationships.

Whatever it is, you should be glad to get such a blessing from higher powers. 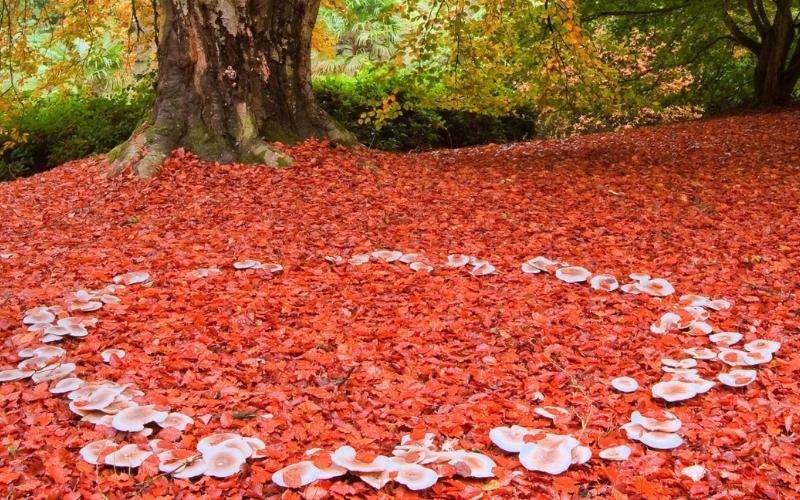 Some folklore believes that fairy rings form a portal connecting our world to a supernatural world. In other cultures, they signify fairy villages and that stepping into one of them would take you out of this world into another.

Many stories tell of people who got spirited away after stepping into a fairy ring.

One tells of a young girl in Ireland who stepped into a Fairy Ring on her way home from buying bread. The story goes on to tell that she was asked to dance with the fairies for a long while and when she finally went home, she found her mother.

The supernatural aspect of this is that her mother had aged 20 years while she had not aged at all. Because she was transported to the fairy realm, time passed much slower for her than it did for her mother on earth.

It is believed that stepping into this portal could take you into a different dimension, and some don’t come out of the world they are in, as was the case with Thomas the Rhymer.

Thomas was asked to serve by the Fairy Queen and dwelt among them for seven years and wrote ballads and foretold events when he returned to his world. He was taken by the Fairy Queen when he grew older, and it is said he dwells there to this day.

In yet another cultural interpretation of fairy rings, it is believed that they bring bad luck to whoever enters or breaks a fairy ring. It is said that those who step into a fairy ring or try to capture the fairies residing there invite bad luck into their lives.

One thing you will notice with most of these cultural traditions is that crossing into a fairy ring will not have good consequences. There was once a story of a farmer who built his barn on a fairy ring, disregarding warnings from his neighbors.

The poor farmer was struck senseless one night and required a fairy doctor to break the curse.

Once the curse was lifted, the farmer said he had to destroy the barn and went ahead to destroy his barn. It is believed that interfering with a fairy ring could bring untold damage to those who do so.

You can imagine how much of a relief it is that I did not enter one of these fairy rings when I was playing around them all those years ago. 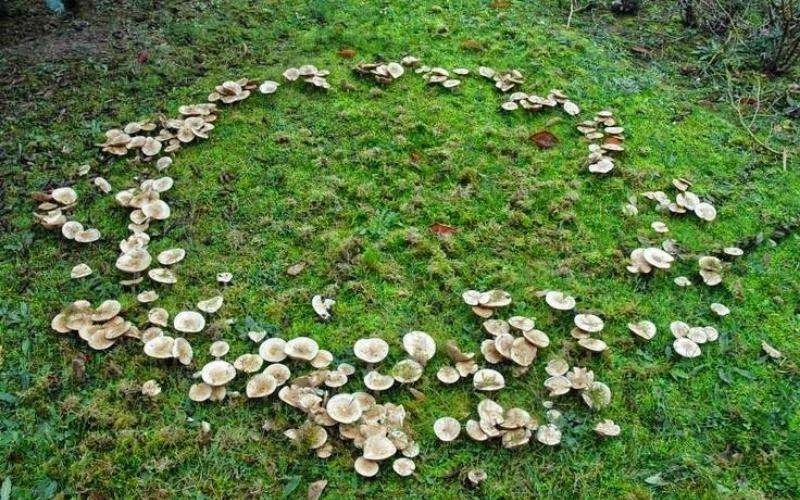 Another spiritual meaning of a fairy ring from different folklore tells of the fairy ring formed by a dragon. It is believed that if a dragon stood or landed on a particular area, only toadstools would grow there, creating a fairy ring.

Other stories say that the fairy circle is where the Devil set his milk churn and placed a hex on any livestock in the area.

It is believed that any livestock that enters or feeds in the fairy ring would have their milk sour, which is quite different from the stories that believe it is good luck to let your livestock feed in that area.

Multiple traditions, some even stretching to the Philippines, believe that different spiritual beings inhabit fairy rings. The myths around these spiritual inhabitations vary from good to bad, and what you believe largely depends on where you are from.

All of these, however, caution against interfering or stepping into a fairy ring.

The most common spiritual meaning of a fairy ring points to it as a place where fairies dance. In other traditions, it is believed that it is where witches go to dance, such as the Hexenringe we talked about above.

Others put fairies and witches in the same category, so it can be seen as a place where witches or fairies dance.

The music from these dances is so enthralling that any human who happens to hear it gets pulled into the fairy ring and is forced to dance until they are exhausted or die.

If there is one thing I am getting from all these folklores, it is that I should never step into a fairy ring, accident or not.

Of course, others believe that being in the area where fairies danced without stepping into the ring can signify good luck. In most traditions, it is believed that those who come out of the fairy rings are cursed or are unable to go back to their normal lives.

As boring as my life sometimes seems, I would not risk this.

What Happens If You Go In a Fairy Ring?

The spiritual meaning of a fairy ring in most traditions all over the world shows that going into a fairy ring is not a good idea. It is believed that disturbing the fairy dance or entering their dwelling spells trouble for whoever does so.

Some stories say those who do so lose their minds or come out a shell of who they were before and never get back to full functioning.

It is crucial to steer clear of fairy rings; most stories, however, tell that stepping around the fairy ring is good luck. All seem to agree that no human should go in a fairy ring.

What Happens if You Break a Fairy Ring?

There is nothing good that could possibly come out of breaking a fairy ring. Some traditions consider it disrespectful and believe that anyone who does this is cursed.

The consequences of breaking a fairy ring are similar to those who enter the ring; it is best to avoid doing so.

Is a Fairy Ring Good Luck?

Certain traditions believe that fairy rings bring good luck to those who see them but do not enter.

The most prevalent is the Welsh tradition, which believes it is good luck to feed your livestock or grow crops around fairy rings.

Other traditions also believe that fairy rings improve fertility. One thing all these traditions share is the caution to not break or step inside a fairy ring.

Doing so will counteract any possible benefits you might have gotten from the ring.

Fairy rings can signify good luck or bring about bad fortune, depending on the folklore you believe. The spiritual meaning of a fairy ring in most cultures seems to point to dire consequences for humans who step into one.

Because of this, it is important to be cautious when you see one of them. There is one thing I would love to know; what belief is prevalent in your area regarding fairy rings?